The State of Banking: Dangerously Close to Digital Paralysation

As new digitally-driven companies are transforming the banking sector into a technology – driven universe, traditional banks, financial institutions and credit unions are struggling to adapt to the new normal and on the brink of the digital paralysation. Dedicated leadership, proper investments and a well-defined scope are pivotal if well-known banks are to survive and reap the benefits of digital.

Over the past ten years, financial services have grown 4 % annually on a global scale. Yet, the banking sector seems to be the tanker in an ocean full of speedboats. Heavy, slow and incapable of changing its course, traditional banks are simply not ready for digital. A newly published digital banking report confirms that a staggering 55 % is lacking digital maturity, whereas only 12 % consider themselves digital leaders. 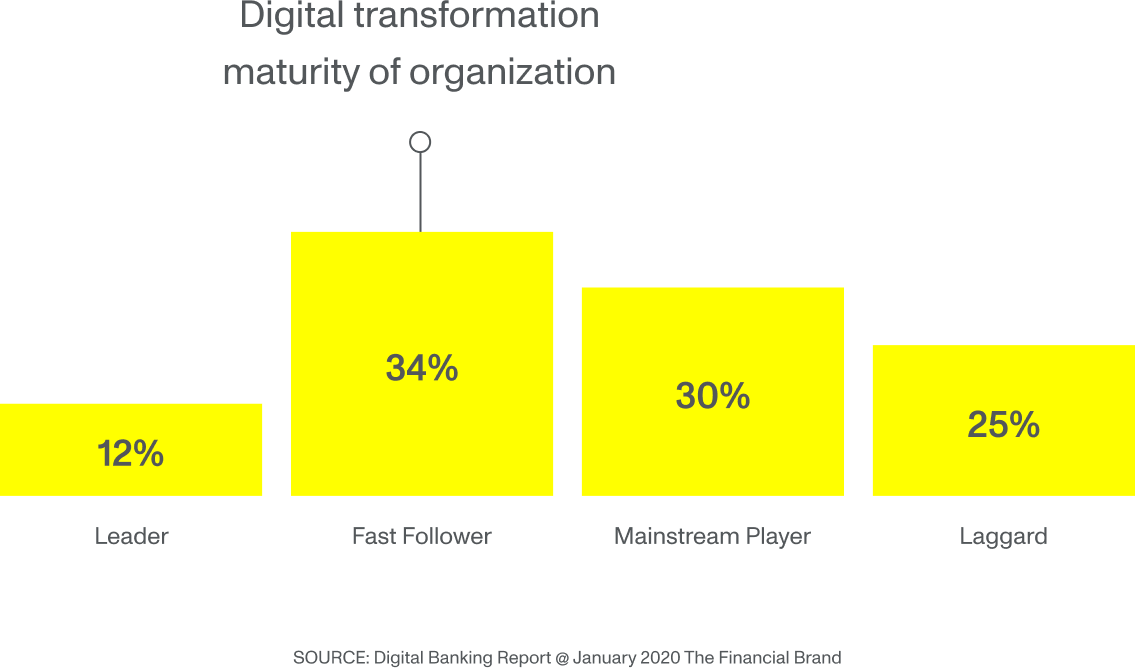 While most bank executives are aware of these trends, few are actually acting on them leaving the financial sector a haven for new businesses to increase their market shares.

And like other sectors have been disrupted by new players on the market, the banking sector is heavily challenged by fintech companies in every aspect of their core business. 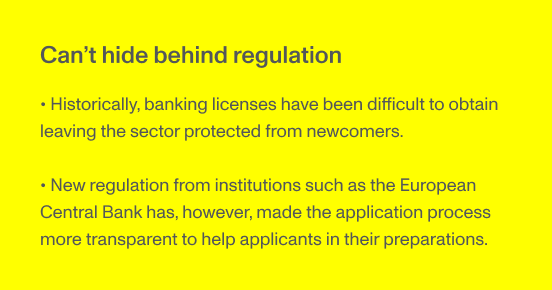 Go all digital or go home

Going digital in banking isn’t just about offering your services digitally. Transferring money, chatting to advisors and checking your bank accounts digitally isn’t the end goal. It is a prerequisite. Going digital means using artificial intelligence, distributed ledger systems, machine learning, apps and open-banking to provide not only products but services to an ever increasingly critical customer base. It is a mindset far away from traditional banking but close to that of the fintech companies, which are stealing market shares from traditional financial institutions.

Transferring money, chatting to advisors and checking your bank accounts digitally isn’t the end goal. It is a prerequisite.

The fintech companies all have one thing in common: they are digitally native. Companies we’ve seen emerge over the past five to ten years such as Lunar, UNDO and Robin Hood do not rely on legacy systems but are fully digital-driven meaning they can utilise the data much more efficiently than many of the traditional banks. Real-time access to accounts, digital services and agile banking is right up fintech companies’ alley, whereas traditional banks are held back by outdated wireframes not able to transform the huge amount of data they have into a seamless customer journey. But where digital native fintech companies are experiencing a gold rush with a disruptive approach to agile banking these days, traditional financial institutions are sitting on an untapped goldmine. The challenge is to prioritise when budgets and digital talents are in shortage and IT infrastructure and legacy (in culture, too) are in plenty. 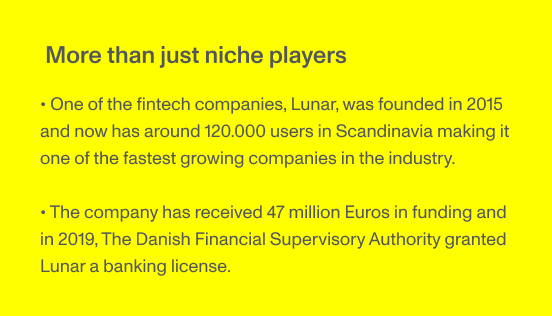 Banks ought to consider themselves as tech companies

Many traditional banks have been around for decades or even centuries. Legacy is evident not only within their IT-systems but in every corner of the business. The challenge is that while banks hold tons of customer data in their outdated systems, they are not utilising its true value to serve their customers’ or own needs.

JPMorgan Chase serves as a great example. At the banking giant, new technology is parsing financial deals that once kept legal teams busy for thousands of hours. COIN, as the programme is called (Contract Intelligence), interprets commercial-loan agreements that, until the project went online in June 2017, consumed 360,000 hours of work each year by lawyers and loan officers (Bloomberg).

COIN is just one out of many examples of how JPMorgan Chase has transformed legacy into automated processes driven by new technology. In October 2018, the company had gone from a 245 billion dollar worth with 235.000 employees in 2016, to a 365 billion dollar worth with 165.000 employees. Since then, JPMorgan Chase has increased its innovation budget by 50 % and initiated several other digital transformation projects that are to turn the bank into a technology company of its own.

The example from JPMorgan delivers an important lesson for every bank looking to transform their business into a technology driven-company. Legacy systems, both in IT and culture, can transform from being a thorn in one’s side to an asset if the transformation is carried out with dedicated leadership, proper investments and well-defined scope.

Eating up the elephant one investment at a time

overnight and start where tangible value can be seen, measured and felt instantly. Digital laggards or mainstream players ought to focus on small, isolated projects with a short-time-to-market to showcase the benefits of investing in digital transformation. The value created – no matter how small the win is – will pave the road for further investments in digital innovation and the business case will serve as evidence to support the development of larger programmes as soon as the right maturity level is reached. This will lead the management to start thinking about the benefits of digital both in terms of costs savings and client faced initiatives.

Explore how Danske Bank became a customer-first company through digital

Understanding how digital transformation isn’t a cost but an investment and is crucial for the future of banks, credit unions and financial services if they are to survive the heavy challenge brought on by the fintechs.
A rule of thumb is not to see digital transformation as a single transaction but a continuous change of the company – even though you might focus on one area at a time. Just like market trends, customer needs and expectations, enterprise technology is constantly subject to change.
That’s why legacy companies need to learn how to work with agile methodology, digital-first and LEAN – methods, which are already part of every Neobank.

It’s a mind-shift far away from traditional banking making it almost impossible for established financial institutions to drive the change on their own. Despite these challenges, opportunities are all around; dedicated leadership, a realistic scope and a desire to change as well as being open to outside guidance from companies who practice agile, non-digital BFSI companies are facing a bright future.

Start prioritising your assumptions. Think about what might have the biggest impact on your users’ needs and prioritise accordingly. Limit the number of assumptions to what is realistic to test in the time frame that you’re operating under. 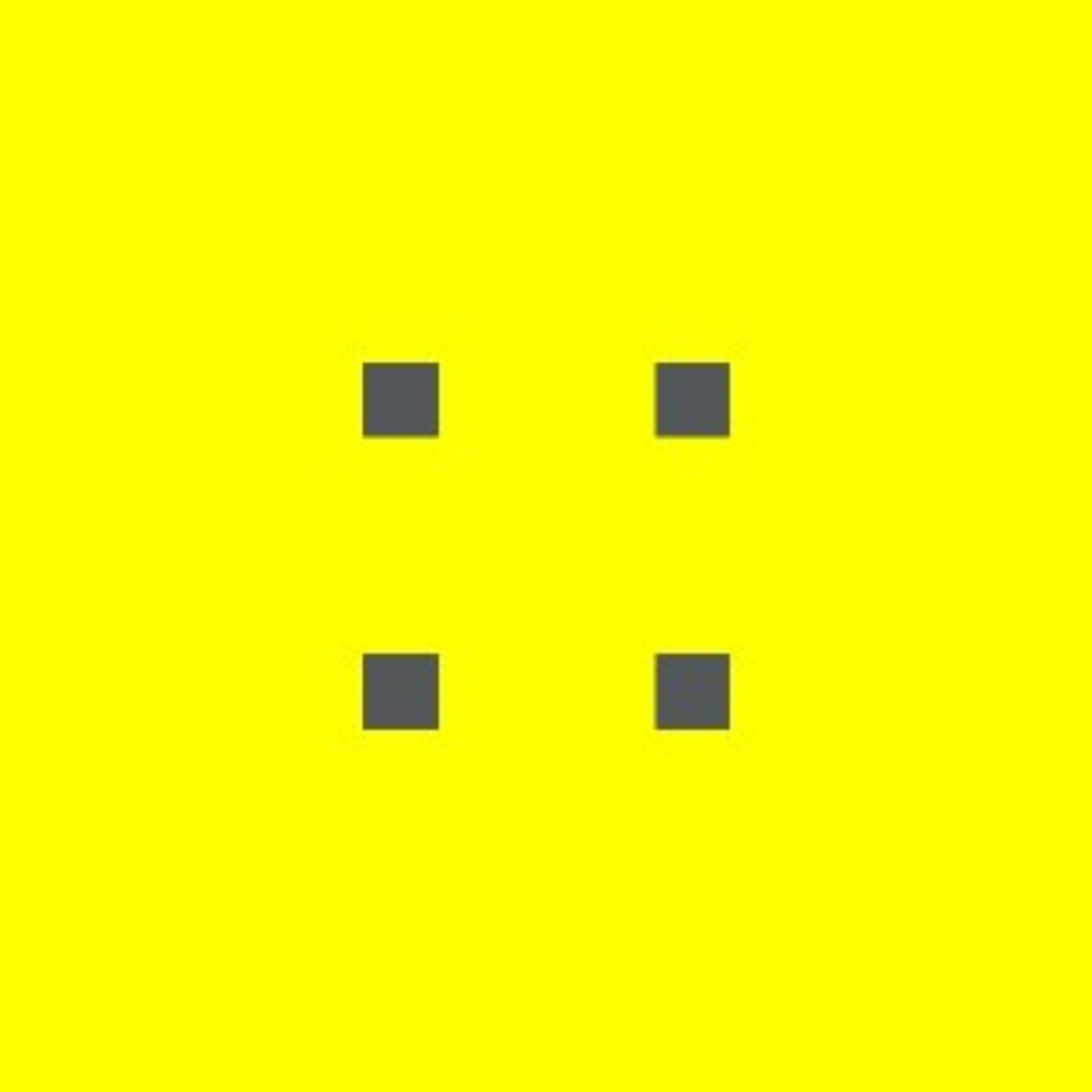 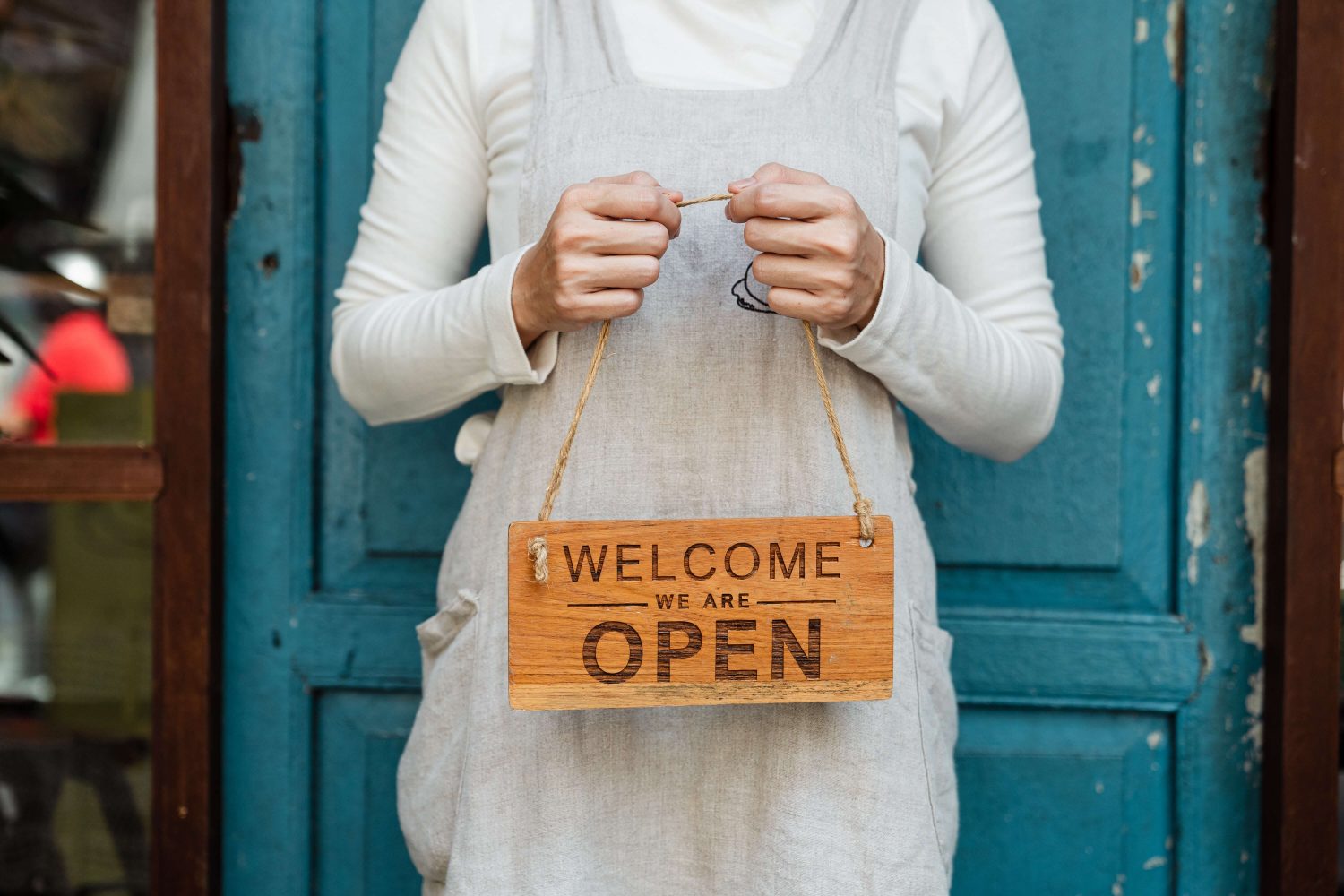 Designing for Hospitality: 7 Tips for Creating Digital and Physical Experiences That Make Us Feel Welcome

Hospitality is a powerful notion that is at the centre of creating delightful user experiences. As a designer who’s worked with clients across a range of industries, I know firsthand the value hospitality can unlock on d... 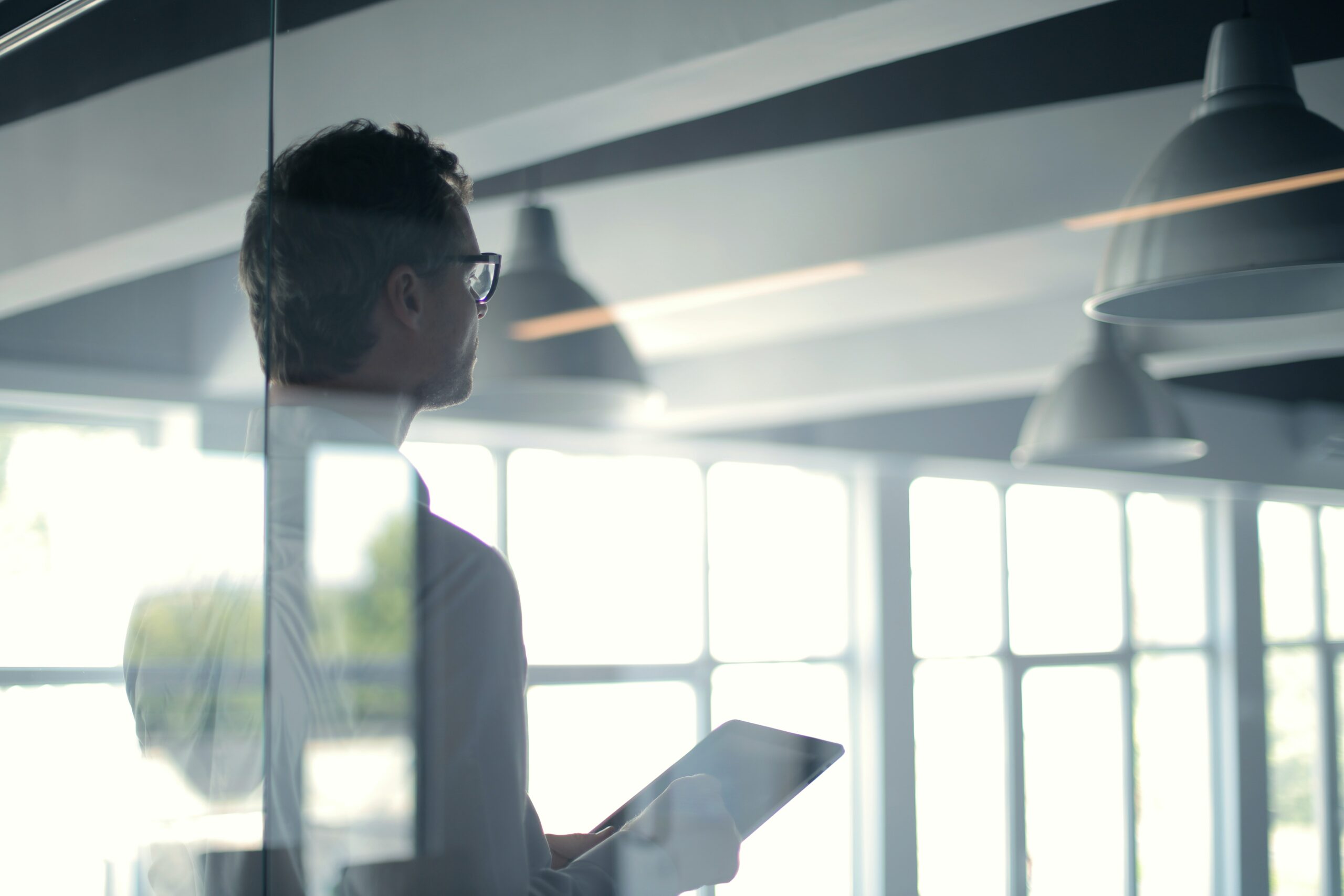 Getting started with machine learning models can seem to be an overwhelming task if data is incomplete, the return of investment expected instantly and business ethics left undiscussed. Early experiments and a long term ... 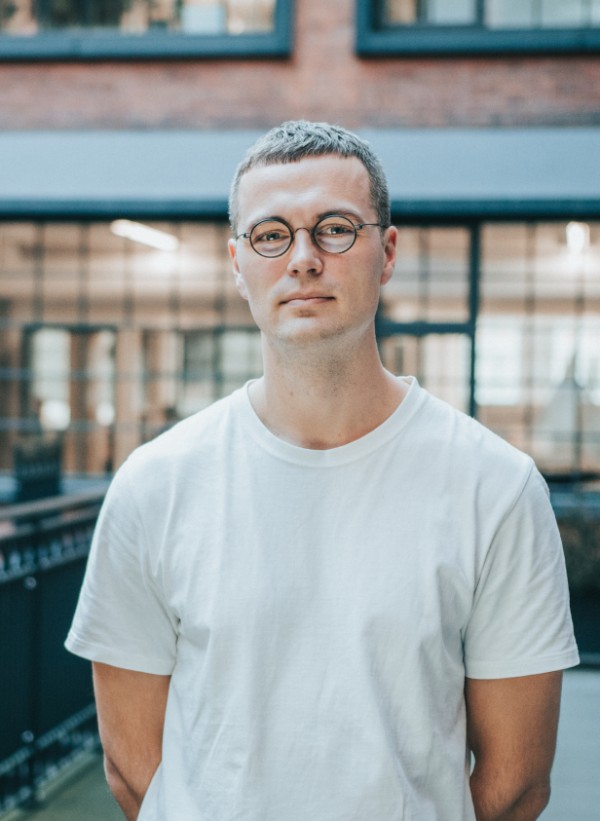