At Monstar Lab, we’re developing our business across 26 cities in 15 countries (as of Feb 2020), which means I now spend more time travelling the globe than I spend in Japan.

For about two thirds of the year I travel to many different countries where I often find interesting needs and problems. In such cases, we consider how Monstar Lab can support businesses in those countries.

This time, I would like to talk about the current situation in the Middle East, which is one of the regions where we want to develop our business. I would like to focus on some of the key players in the region: Saudi Arabia, UAE, Qatar, Oman and Kuwait.

The economic scale of Riyadh, the capital of Saudi Arabia, is only about 20% of the country. There are natural resources in the east  and the major city of Jeddah in the west; so it’s fair to say that the economy of Saudi Arabia is well dispersed.

Because crude oil prices have been falling in recent years, the private sector has become stagnant. Nonetheless, IT companies are seeing an increasing number of orders from the government sector because they are focusing on digital transformation in line with “Vision 2030” (an effort to reduce dependence on oil and diversify the economy).

Unlike the UAE and Qatar, it is hard for Saudi Arabia to grow relying on foreign workers because it already has a large population and a high unemployment rate. Moreover, the number of foreign workers has decreased by about 2 million because of the progress of “Saudinization”, a national policy that prioritizes the employment of Saudis in private companies. It is now a legal requirement to proactively hire Saudis.

The number of Saudis who have to be hired varies by industry and size of organization. Companies must pass regular inspections conducted by the government otherwise they might not be able to continue doing business in the country.

IT companies must employ at least 20% of their human resources locally, though the percentage varies depending on the size of the company. The other 80% can be foreigners, but even then it is not an easy task to find great talent.

The number of companies establishing local engineering bases is increasing but many of them still use foreign IT outsourcing services, mainly from India and Egypt, where labor costs are low. Outsourcing services in Jordan, Lebanon and Eastern European countries are also part of the mix.

Because Saudi Arabia is a relatively open market for foreign companies and human resources, we are closely following developments to see how we can be engaged with the recent boom in IT projects from the government sector.

When I visit foreign countries, I pay attention to market size, unit price, international community and openness. In this regard, the UAE is attractive. So it’s hardly a surprise that in 2019 we chose Dubai as the location of our first office in the Middle East.

The UAE’s GDP is ranked 30th in the world and 4th in the region. Most sectors, including the economic, commerce, tourism sectors, are concentrated in major cities such as Dubai and Abu Dhabi. The workforce is extremely international, with foreigners making up about 80% of the country’s population. It is easy to obtain working visas. 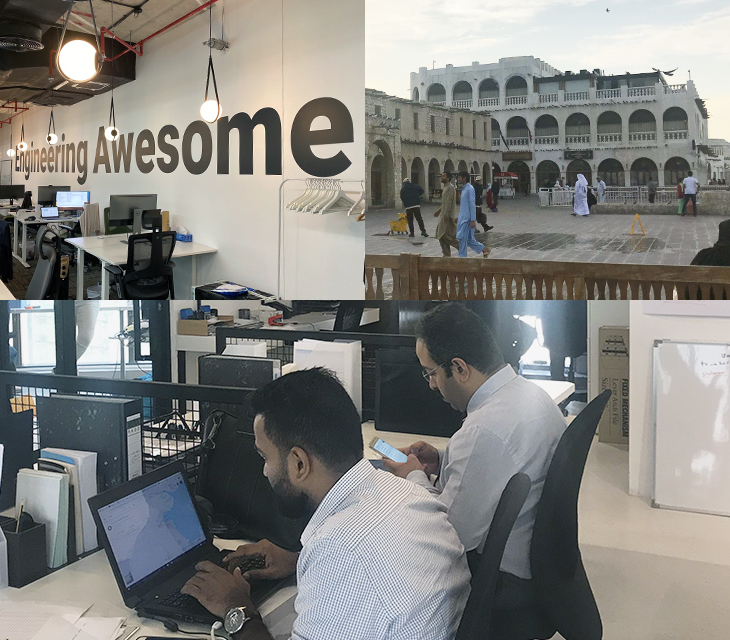 There are almost no UAE nationals in IT development teams, with many companies being  strongly multinational. Many companies that require IT development have teams based in India. There are many cases where outsourcing destinations are chosen depending on the background of engineering team leaders such as the CTO.

Qatar, meanwhile, is very famous for oil and natural gas related industries, which accounted for more than 60% of GDP in 2019. The population is a little less than 3 million, but Qataris are just over 10% while the remaining 90% are foreign workers from South Asia and Southeast Asia.

Qatar is strengthening its relationship with China, especially in terms of its economy. Because 80% of company projects in Qatar are from the government, it might be difficult to enter the market without connections and partners. Just like in the UAE, India also has a huge share of the outsourcing market in Qatar.

Since Qatar broke off diplomatic relationships with the GCC (Gulf Cooperation Council) countries, its economy has been stagnating and shrinking. However, some people, including Monstar Lab, see this reduced competition as an opportunity.

Oman and Kuwait are small markets with high growth potential

We are also interested in business opportunities in the smaller Gulf states. Oman, for example, ranks 70th in the world in terms of GDP. The main characteristics of its IT development sector are that the market is not very large and engineer salaries are low. Many of the development companies are formed by Indian-centered teams.

To establish a company in Oman, you need to have Omani or American shareholders. In addition, companies that want to work in projects from the government must be members of the Tender Board; however, the law restricts foreign companies from becoming members. There may be business opportunities in Oman for those who can collaborate with local companies or understand the needs of the market.

In Kuwait, many citizens work as civil servants and employees of state-owned enterprises. They receive high compensation, while other jobs are assigned to foreign workers. With this system, Kuwait established an economy dependent on oil.

However, the government is trying to depart from oil reliance in anticipation of falling oil prices. Already there’s a growing awareness among many companies of Kuwait becoming a hub for the Middle Eastern Gulf states. While visiting Kuwait, I observed many start-ups that are targeting the rest of the region.

Bahrain, another country that plays a role as a hub in the Middle East, recently broke off diplomatic relationships with Qatar. As a result, companies in Kuwait are acquiring projects from Qatar. As in other GCC countries, these companies typically outsource engineering to India or Bahrain where costs are lower than in Kuwait.

As you can see, the situation in the Middle East is different from country to country. The challenge for Monstar Lab, with our 1,200 global colleagues including engineers and creators, lies in understanding how we can contribute to the development of each of these markets. There are also other Middle Eastern countries that deserve our attention and I will introduce these in my next column.